The herbal sweetener stevia was allowed as a food additive in the EU in December 2011. Thus, the analysis of stevia, a mixture of various steviol glycosides, has become more important. 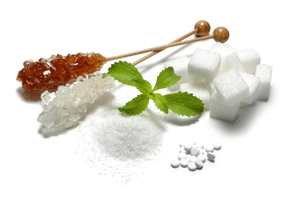 HPLC separations of steviol glycosides with a classical RP 18 phase based on porous silica, diverse HILIC phases, and a modern RP 18 phase on core-shell silica are presented below.

Stevia is a mixture of sweeteners extracted from the plant Stevia rebaudiana, which is native to South America. Its sweeting power is 300-fold stronger than sugar and for hundreds of years well-known to the natives in the border area of Paraguay and Brazil [1]. In 1887, the Swiss botanist M. G. Bertoni discovered the plant and gave it the name Stevia rebaudiana Bertoni. Already in 1920 stevia was cultivated in plantation. The leaves were used to sweeten tea and coffee. Further investigations as sugar substitute were made in England in World War II. In Japan, cultivation in greenhouses were carried out in 1954, and in the 1970s stevia was allowed as sugar substitute. Due to several studies about possible health risks from stevia [2], stevia products were prohibited in the USA in 1991. Already since 1986 stevia leaves and stevia glycosides were also imported to Europe. Due to insufficient studies about a harmlessness to health, they were withdrawn from sale in 2001. After evaluations of further studies by the WHO, no indications for mutagene effects on humans have been found until now. In 2008 authorization or partial authorization are granted in Australia, New Zealand and the USA. On December 2nd, 2011 an EU regulation became valid, which allows a processing of the natural stevia sweetener steviol glycoside in food and drinks [3].

Stevia sweetener mostly consists stevioside and nine to twelve steviol glycosides in relation to the species [4]. The sweetness results mainly from stevioside and rebaudioside A. Further sweet ingredients are rebaudiosides C, D, E and F, as well as ducloside A.

Separation with a classical RP phase

HPLC methods are preferred for analytical separation of steviol glycosides, even if methods with capillary electrophorese (CE) and High Performance Thin Layer Chromatography (HPTLC) have been published [5].

A separation of steviol glycosides from the commercially available stevia product „Daforto Stevia Basic“ is shown in application no. 125622 in the Sorbtech application database. The HPLC column used is packed with a base deactivated RP 18 phase based on porous silica. Acetonitrile – phosphate buffer at pH 2.6 is used as eluent in an isocratical run. Detection is performed with a UV detector at 210 nm. With this classical RP application, nine steviol glycosides can be separated in 20 min (chromatogram and more details).